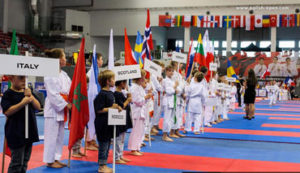 On behalf of the organizers: Polish Karate Union, KSA Atemi, the Municipality of Bielsko-Biała and the local Government of the Silesian Voivodeship, I have the honor to invite you to participate in the 12th  POLISH OPEN – Grand Prix Bielsko-Biała, which take place from 5th to 7th of October 2018. After last year’s great organizational success, which has been widely echoed in the sport environment, we will do our best to make this year’s edition even more successful. The competition will take place, as every year, in the modern sports hall “Pod Dębowcem” and will be played even on 8 tatami.

Very strong national teams from Europe, Asia and Africa has already announced their participation in POLISH OPEN. This competition is an excellent test for seniors, who in November, in the capital of Spain, will compete for the World Champion titles. Also, young players will have a chance to test their skills with the best players in the world. The special guest of the competition will be the Chairman of the WKF Referee Commission Mr Javier Escalante. The Chief Referee of POLISH OPEN will be the Secretary of WKF Referee Commission Mr Robert Hamara.

I am convinced that the competition in all events will be struggle and once again we will be witnesses of a great karate event, which will take place on the eve of the historic Buenos Aires 2018 Youth Summer Olympic Games. I wish successful fights to competitors, satisfaction with the results to coaches and officials, and a lot of emotion to all spectators.