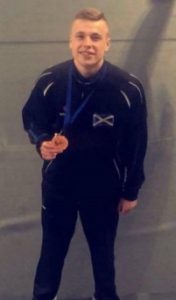 I have participated at the Polish Open over the past 2 years. In 2014 my coaches had decided for my team and myself to go and compete in Bielsko–Biała. I was excited to take part in the competition because it was very well advertised. The flight from Scotland to Poland was not too long but when I arrived in Bielsko-Biala it was surprisingly colder than back home. However when I arrived at the hotel I had a good feeling because there was a beautiful new sports hall which was one of the greatest I have competed in. What made the atmosphere good was all the different teams such as the Japanese and Italian teams and I knew the standard was going to be at a high level.

In 2015 I returned again to Bielsko–Biała and I was amazed because the quality of competitors had furthermore increased as there was European/World medalists participating. The organizers have been exceptional with making the competition feel like a European/World championships. The Polish Open has been kind to me as I have won 2 golds and 2 bronze between 2014 and 2015. It has also been a key stepping stone towards my journey to the World championships in Jakarta and the European Championships in Limassol.

I hope to see you in 2016!
Kind regards
Dylan Rush